No deliberate and structured bilateral meetings will take place between U.S. President Donald Trump and Prime Minister Justin Trudeau over the next two days. The meetings will happen on the margins of the NATO summit in Brussels. 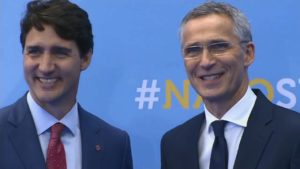 The NATO meeting will be the first time that the two leaders have been in the same room together since the disastrous G7 summit in Charlevoix, Que., last month and there’s seems to be no sign of a thaw in their current relationship.

Trudeau said Tuesday said that at the moment, there’s no face-to-face meeting planned between Trudeau and Trump, but they will have a chance to see each other. 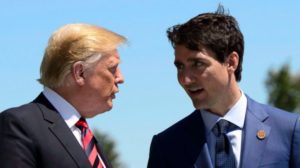 “I look forward to having words with President Trump, having a conversation with him, as I always do,” the prime minister told reporters following a whirlwind visit to Latvia, where Canada has 455 troops deployed as part of NATO’s Operation Reassurance.

Relations between Canada and the U.S. were deteriorated following the imposition of steel and aluminum tariffs by the Trump administration, an action that triggered swift, sweeping counter measures from the Liberal government.
Trump took made Twitter jibes at Canada following the G7 summit, mostly over Canadian dairy policy but reserved his most persistent and personal attacks for Trudeau himself, calling him “dishonest” and “weak” for telling the closing G7 news conference that Canada would not be “pushed around” on trade.
White House officials referred to the prime minister as a back-stabber. Trump’s trade adviser Peter Navarro went as far as telling a U.S. talk show that there was “a special place in hell” for Trudeau, though he later retracted his remark.
On his way to the NATO summit, Trump fired off another Twitter volley, “Many countries in NATO, which we are expected to defend, are not only short of their current commitment of two per cent, but are also delinquent for many years in payments that have not been made. Will they reimburse the U.S.?”

NATO members don’t pay dues, although they do contribute to common military and civilian programs and Washington pays almost one-quarter of those costs. The formula is based on national income; no NATO ally is in arrears.

Trudeau stressing on the fact that Canada would not double its defence budget to get to that mark, said, “It’s an important metric, among others, to gauge how countries are doing in term of contributors to NATO,” the prime minister said. “But ultimately the more important metrics are always … countries stepping up consistently with capacities that NATO needs.”

Saskatchewan’s premier is again asking Ottawa to increase its cash advances to canola farmers. Scott Moe says in a letter to Prime Minister Justin Trudeau, posted on Twitter, that he’s been waiting nearly a month […]

Trudeau Violated The Law by Expelling Her, Wilson-Raybould From Caucus: Jane Philpott

Former cabinet minister Jane Philpott says Prime Minister Justin Trudeau violated the law when he expelled her and Jody Wilson-Raybould from the Liberal caucus. In the House of Commons, Philpott says the Parliament of Canada […]

A Toronto-area Liberal MP, Leona Alleslev, is crossing the floor to join the Conservative Party. Alleslev, who represents the riding of Aurora-Oak Ridges-Richmond Hill, rose on a question of privilege at 1:35 p.m. ET on […]