Donald Trump and Kim Jong Un committed on Tuesday to “complete denuclearization” of the Korean Peninsula during the first meeting in history between a sitting U.S. president and a North Korean leader.

The two leaders promised in their joint document to “build a lasting and stable peace regime” on the Korean Peninsula and to repatriate remains of prisoners of war and those missing in action from the Korean War. 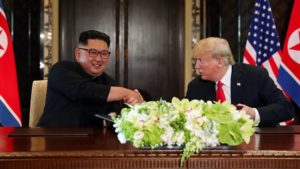 Trump says his historic talks with North Korean leader Kim Jong-un that ended in a joint agreement were “tremendous”.

Trump and Kim came together for a summit at Singapore island that seemed impossible months ago when the two nations traded nuclear threats.

Both leaders expressed optimism throughout roughly five hours of talks, with Trump thanking Kim afterward “for taking the first bold step toward a bright new future for his people.” Kim, for his part, said the leaders had “decided to leave the past behind” and promised: “The world will see a major change.” 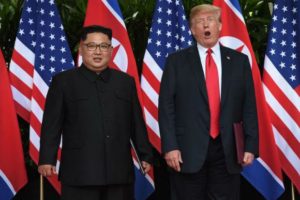 Trump announced that he will be freezing U.S. military “war games” with its ally South Korea while negotiations between the two countries continue. He cast the decision as a cost-saving measure, but North Korea has long objected to the drills as a security threat.

Trump added that Kim has accepted an invitation to visit the White House — at the “appropriate” time.

The formal document-signing followed a series of meetings at a luxury Singapore resort.

After the signing, Trump said he expected to “meet many times” in the future with Kim and, in response to questions, said he “absolutely” would invite Kim to the White House. For his part, Kim hailed the “historic meeting” and said they “decided to leave the past behind.”

The reaction around the world has largely been positive.

South Korean President Moon Jae-in, who held his own meeting with Kim earlier this year, said the “two Koreas and US will write new history of peace and co-operation”.

China, North Korea’s only major diplomatic and economic ally, also said the meeting created a “new history”. The foreign ministry said sanctions on North Korea could be eased if it stuck to UN resolutions.

But Russia warned that the “devil is in the detail” and Iran said North Korea should not trust the US. Mr Trump recently pulled the US out of a nuclear deal with Iran.

Atul Kochhar, a popular Indian-origin chef in the UAE, was  sacked by a Dubai hotel after he courted controversy by posting an anti-Islam tweet that caused outrage on social media. Kochhar who is the second […]

Yoselyn Ortega, a nanny has been found guilty of murdering two children she stabbed at their luxury New York City apartment. Yoselyn Ortega had pleaded insanity, but the jury rejected that defence as they unanimously […]

Emergency door of Nigerian Airlines fell off shortly after landing

A Nigerian airline has blamed a passenger after one of its aircraft doors fell off shortly after landing.The flight from Lagos to Abuja was taxiing on the runway when the emergency exit door came away. […]