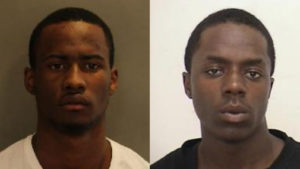 Sheldon Ariya, 21 a third suspectof Markham was arrested Saturday and is facing seven charges including two counts of attempted murder.

The 2 suspects still on looses- Tarrick Rhoden, 23, and T’Quan Robertson, 23, both of Toronto, are each wanted for discharging a firecarm with intent, attempted murder and two counts of aggravated assault.

Rhoden is described as six-foot-one and 181 pounds.Robertson is described as five-foot-eight and 130 pounds.
Police said both men are considered armed and, if seen, should not be approached.

Police in Mississauga, Ont., have identified one of the three suspects in the recent assault of a 29-year-old man with autism at a bus terminal in Mississauga. A video of the attack released by police […]

An American company has recalled 37 million fire extinguishers in the U.S. and 2.7 million in Canada because they can get clogged or require excessive force to discharge and won’t work in an emergency. Kidde Corporation, […]