UK’s strong Sikh community is all set to be listed in the 2021 census as a distinct ethnicity rather than only as a religion which is a major step that will give the community fair access to all public services in the country.

Britain has a 4,30,000-strong Sikh community that would benefit from this change.

The 2021 census is set to list Sikhism as a distinct ethnicity rather than only as a religion, The Sunday Times reported.

Last year, over 100 British lawmakers, including Indian-origin lawmakers, had asked the authority to include Sikh as a separate ethnic box for the 2021 census. 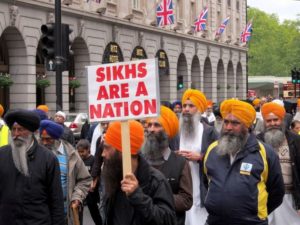 In the most recent census in 2011, more than 83,000 Sikhs refused to tick any of the choices in the question on ethnicity, rejecting options such as Indian in order to write “Sikh” in the space for “any other ethnic group”, it said.

The Office for National Statistics (ONS) is considering the inclusion of Sikhism as an ethnicity on the 2021 form, but had raised concerns over the issue of “public acceptability” and whether the move would have backing across Britain’s 430,000-strong Sikh community, the report said.

The all-party parliamentary group for British Sikhs offered to write to Gurdwaras to assist the ONS with its public consultation, it added.

Sikhs are a legally recognised ethnic group under the UK’s Race Relations Act 1976 and campaigners for the change believe this gives them a right to be able to identify themselves separately from current census options, such as Indian or British Indian.

Sikhs are already recognised as a separate religion within an optional religious question introduced in the 2001 Census.

In preparation for the 2021 census, which is expected to be conducted largely online, the ONS ran a test version of the census in 2017 with ‘Sikh’ included as an option under ethnicity in areas with large Sikh populations – Hounslow in west London and Wolverhampton in the West Midlands region of England.

It found that almost a quarter of those who specified Sikhism as their religion also chose Sikh as their ethnicity.

India to ask Canada, UK for details of properties of 18 NRIs in Punjab drug case.

A special court of India’s Central Bureau of Investigation on Saturday allowed the Enforcement Directorate (ED’s) application seeking details of properties of 18 NRIs, alleged to be involved with notorious drug lord, Jagdish Bhola, a former police […]

Two teenagers involved in a road crash in India reportedly died after police refused to take them in their patrol car to the nearest hospital. Three police officers in Saharanpur, Uttar Pradesh, are accused of […]