Damien Sanderson, one of the suspects in a mass stabbing that left 10 people dead and 18 injured in Saskatchewan, Canada, was discovered dead on Monday.

At a press briefing, Assistant Commissioner Rhonda Blackmore of the Federal Police stated that authorities in the James Smith Cree Nation had discovered Damien Sanderson’s body “body was located outdoors in a heavily grassed area in proximity to a house that was being examined.”

“We can confirm he has visible injuries. These injuries are not believed to be self-inflicted at this point,” Blackmore added.

2/2 Instructions: The public should take appropriate precautions. Do not approach suspicious persons and report any information to your local police and emergencies to 911. ^km

Myles Sanderson, Damien’s brother, is still at large, she said further. He’s likely to be injured and might even be looking for medical attention.

Asserting that “Even if (Myles) is injured it does not mean he is not still dangerous,” Blackmore urged the general public to remain cautious.

Myles, according to the Assistant Commissioner, has a “lengthy criminal record involving both persons and property crimes.”

The Saskatchewan coroner’s office, which has not yet established a date and time for the examination, will identify the precise cause of death. 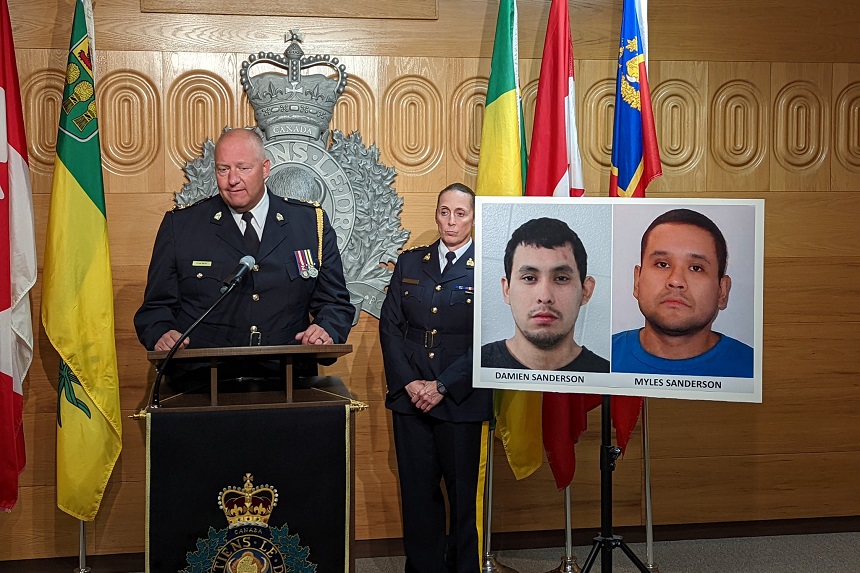 Charges against both suspects were made public by the RCMP on Monday morning. Myles is accused of breaking and entering as well as three counts of first-degree murder, one count of attempted murder, and three counts of murder. A first-degree murder charge, an attempted murder charge, and a breaking and entering charge were all brought against Damien.

Myles is described by the police as being 240 pounds, six feet one inch tall, with black hair and brown eyes.

The two were last known to be driving a black Nissan Rogue with the licence plate 119 MPI when they were last spotted in Regina on Monday morning. Commanding Officer Rhonda Blackmore stated during a press conference on Sunday that they are unsure if the suspects have changed their vehicle since and that their course of travel is still unknown.

Last planned update for the evening unless there is new info.The search continues for Myles Sanderson.Our investigation will continue thru the night & until he is located or safely taken into custody. Please take the time to watch this quick update. https://t.co/mFUSB1BzOQ

Following stabbings in the remote James Smith Cree Nation Indigenous community and the town of Weldon in Saskatchewan province in western Canada, Canadian police have been searching for the two since Sunday.

If anyone encounters the suspects, they are urged to dial 911 and get out of there right away.