Geeta Modha,55 an Indian-origin businesswoman managed to travel from UK’s Manchester city to New Delhi via Dubai on her husband’s passport before the serious lapse was picked up in India, prompting the Emirates Airline to launch an investigation into the incident. 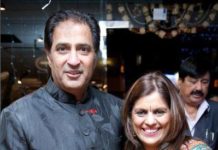 Geeta Modha, who runs Alankar boutique in Rusholme area of Manchester, left for the airport with husband Dilip’s passport by mistake for a business trip on April 23.

Modha was able to check-in and board the flight and was waved through a stopover at Dubai on to New Delhi before the error was picked up, according to ‘Manchester Evening News’.

As a holder of Overseas Indian Citizenship (OCI), Geeta was expected to produce her passport at Delhi immigration and was denied entry to India at that point.

“The fact they say they are so strict on security in airports but you can do this in 2018 is terrible. At check-in, the staff member even made me move stuff from one bag to another because it was 2 kg over – and yet let me travel with the wrong passport,” she said.

Indian authorities made Geeta travel back to Dubai to wait for her own passport, which was flown to her by Emirates.

Geeta showed her passport at Manchester Airport during check-in and again before boarding her flight and was able to sail through customs.
During her scheduled stop-over in Dubai, she did not have to show her passport because she had an OCI card.

The error was only picked up as she was filling out her immigration form at Delhi Airport.

An Indian court has sentenced Bollywood superstar Salman Khan to five years in jail for poaching rare antelope back in 1998. The court in Jodhpur also fined him 10,000 rupees ($154) for the crime. He […]

Fire commissioner said today that a preschooler toying with the burners on his mother’s stove accidentally sparked New York City’s deadliest fire in decades, an inferno that quickly overtook an apartment building and blocked the […]